Most of the time, when you start working with Git, you find it confusing, and the first question you ask is “How do I push commits using the command line?”

Leaving the motivational lines and philosophy aside, let’s start working on it and finish things in five minutes.

But, first of all, this post is for Linux users, as it’s mentioned already. Second, I hope you’ve Git installed on your machine and if it’s not, then just open your terminal and do a quick –

Now, since you’ve Git installed. So, it’s time to finish the job.

Open your terminal ( I know it’s already opened ) and type –

STEP 2:  Authenticating with GitHub from Git

Let’s be little fast and set things up using SSH instead of using HTTPS stuff, okay?

After hitting enter, you’ll get the following lines:

Generating public/private rsa key pair.
Enter file in which to save the key (/home/user/.ssh/id_rsa):

Do nothing. Just hit enter to proceed to the next step where you’ll be asked to enter a passphrase, twice.

Type your passphrase, for example: “gitubuntu1337” or whatever you want and hit enter. Type the same passphrase again and hit enter to proceed to the next step.

STEP 3: Adding your SSH key to the ssh-agent

STEP 4: Adding a new SSH key to your GitHub account.

Use xclip to copy your ssh key. But before that, you need to install it because I think Linux doesn’t come with xclip preinstalled. So. just type:

And when the downloads are finished, use the following command to copy your ssh key to the clipboard: 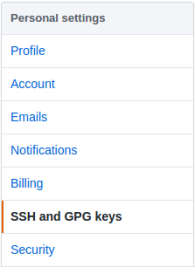 To test whether you are being able to push commits using Git and you’re connected via SSH or not, follow the given steps:

So, it’s time to push the commits and for that, you’ve to do:

So, finally, you know how to set up Git and work with it. This is a simple example that teaches you the basics so that you can work on the small repositories. But Git is really huge and so is its usage, so just keep exploring and try learning different commands.